It wasn't long ago that most people worked for someone else. They clocked in at the beginning of the day, clocked out at the end, and collected a regular paycheck. Many workers still do that, but an increasing desire for people to work for themselves combined with a need for businesses to save money has led to the rise of something new: the gig economy. 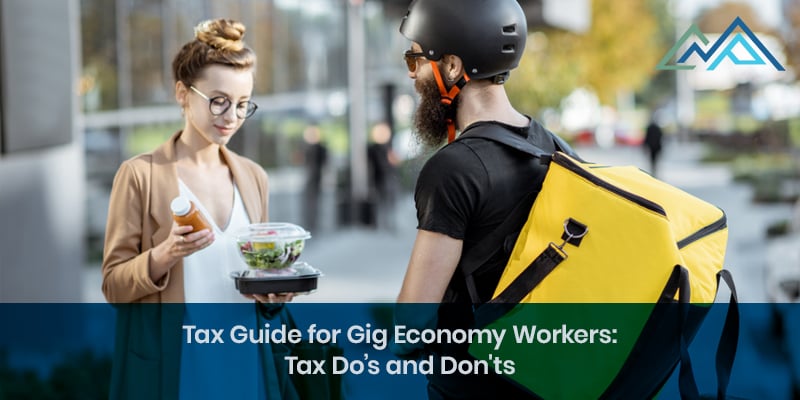 At Cook Martin Poulson, we work with gig economy workers every day. We understand the tax rules that apply to gig workers and how their income can fluctuate and impact their taxes. We are here to provide the information and guidance you need to meet your obligations.

If you are a gig worker, keep reading to learn about tax dos and don'ts that apply to self-employed contractors.

What is the Gig Economy?

The gig economy refers to a percentage of employees who are self-employed and may contract work for one or more companies. In 2006, the Bureau of Labor Statistics estimated that between 2% and 4% of all workers were gig workers, while 7% worked as independent contractors.

In the last 15 years, those numbers have increased dramatically. According to one survey, between 25% and 30% of all Americans have participated in the gig economy. The engagement in the gig economy includes a broad spectrum of workers, from those looking to supplement income to those that rely on gig work for their primary income. If you are a contractor or are self-employed, you are part of the gig economy.

There is more than one way to define a gig. The simplest definition is that gig work involves doing a one-time job on a contract basis. An example might be writing a blog post, designing a logo, or building a website. Many gig workers find jobs through digital platforms and apps. Some do work on an ongoing basis and may have long-term contracts that stop short of full employment.

Gig work may be part-time or full-time. Many people supplement their income by doing gig work in their free time.

Whether you occasionally work as a contractor or earn all your income from gig work, you need to pay taxes. When you file your tax return, you need to report the income you earned for gig work throughout the year.

It is essential that you report all income you earn for gig work, including the following:

As a gig worker, it is your responsibility to keep track of all income you receive from gig work.

Also crucial to your gig work is to track your expenses related to your gig. That includes keeping all receipts related to your business. Additionally, gig workers should make sure to track their vehicle use. An easy way to track business miles is to use a mileage tracker on your phone. Also, be prepared to pay estimated taxes every quarter.

How Do Gig Workers Pay Taxes?

Whether you occasionally work as a contractor or earn all your income from gig work, you need to pay taxes. The IRS requires that gig workers report any income over $400 on their tax return.

Here are the steps to follow to meet your taxpayer obligations as a gig worker.

You can avoid penalties and fees by paying your estimated taxes on time.

As a gig economy worker, you must take care not to make mistakes on your income tax return. When you are self-employed, there are some important steps you can take to meet your obligations and avoid problems. Let's start with the things you should be doing.

Here are a few common mistakes to avoid.

As a taxpayer, avoiding common mistakes on your tax return can save you time, money, and stress. If you are not sure where to start, we suggest that you use the information here as a starting point and connect with a tax professional to get answers to your questions.

One of the biggest issues with being part of the gig economy is understanding the deductions you can take on your tax return. Here are some of the most common deductions:

You may be required to pay taxes you wouldn't have to pay as an employee, but if you take advantage of every deduction that applies, you can do a lot to minimize your tax bill.

In March of 2021, President Joe Biden signed the American Rescue Act into law. In addition to providing stimulus payments to many US workers, the new bill made some important changes to income taxes for gig workers.

Both changes are related to the work done through gig economy websites such as Etsy, Uber, DoorDash, and Lyft. Previously, these companies were required to send a 1099-K form only to workers who earned over $20,000 in income or had 200 transactions. Most workers who received only part of their income from gigs were exempted, and many may not have reported their income accurately.

The result is expected to bring in billions of dollars in revenue to the IRS. It may also be an issue for gig workers who have underreported their income and self-employment taxes in the past.

If you are part of the gig economy, don't let concerns about the IRS cause you stress or anxiety. The best way to avoid tax problems is to work with a dedicated tax professional who can provide you with the necessary information to pay your estimated taxes. Cook Martin Poulson professional tax preparer, can help you uncover the applicable deductions you qualify for to get every dollar you deserve. Contact us to schedule an appointment today!

Erik is an experienced tax professional with a demonstrated history of working in the accounting industry. Over his career, Erik has broad exposure to many accounting and tax issues. He has worked closely with clients that ranged from large publicly traded corporations, corporations in their Initial Public Offering (IPO) and corporations working towards their IPO. Additionally, Erik has worked with operating partnerships, private equity partnerships, S-corporations, high net worth individuals, and trusts.