7 Things You Can Do to Avoid an Audit

Taxpayers often fear the idea of being audited for the simple reason that even if you didn’t purposely do something wrong, there could be a mistake in your returns. 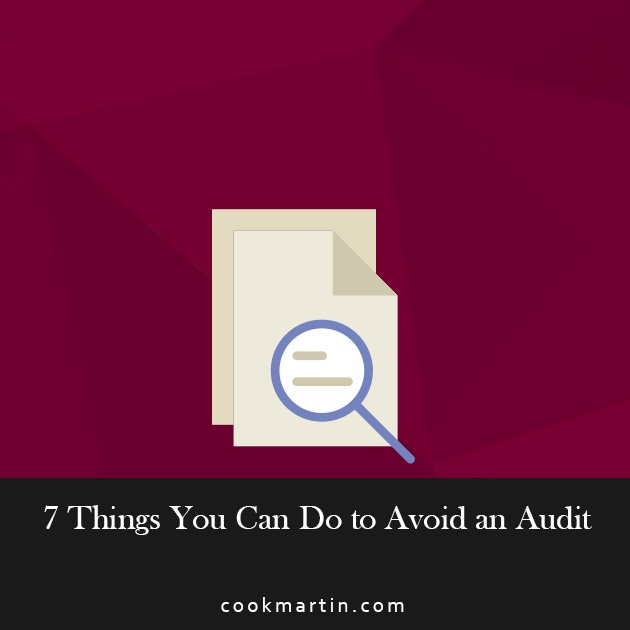 For this reason, and the added hassle that comes from having the taxman asking lots of questions about items in your return, you should do everything you can to avoid getting audited.

First things first: What is an Audit?

An audit is an examination of the financial reporting of an organization, or in this case an individual, by a third party. This can be an accounting firm, an investor, or regulatory body, but in the terms we are thinking about it, it means the IRS.

First, they help to catch people who are underpaying on their taxes or committing other frauds, which results in more revenue collected and punishment being exacted on those who violated tax law.

The other result is more of a second-order effect. When someone sees another offender get a huge fine or prison time, they are much less likely to violate tax laws. Audits essentially keep taxpayers in line with the threat of trouble if they have evaded taxes in some way.

Tax evasion is the next point that’s important to understand. It’s the act of paying fewer taxes by not reporting income or other sources of manipulation, and it is illegal.

This is not to be confused with tax avoidance, which is the act of not paying unnecessary taxes. The fine line between evasion and avoidance is usually what gets people audited. The government sees what could be considered suspicious behavior and decides to investigate, and then the next step is to audit them to verify the evasion.

These audits are time-consuming and costly. When you’re forced to divert resources to handle audits, you are losing out on other potential gains your company could be experiencing. So, the best course of action for you to take is to audit-proof your company.

Not only does this mean doing things by the book and not undertaking any accounting practices that are too aggressive, but it’s also looking at your company from the perspective of an outsider and figuring out what might look suspicious.

There are a variety of ways this could be done, whether you have your CFO or an entire team do this, but knowing where your business model attracts suspicion is a key part of avoiding an audit and keeping your company firing on all cylinders.

This isn’t necessarily something you can have complete control over, but just as you can avoid many of the worst illnesses by using good habits over time, you can reduce your chance of being audited.

The seven items identified below are field-tested tricks you can use to reduce your chance of being audited.

This is the easiest one to avoid, so make sure to spend the time needed so all your numbers add up!

Whether you or your accountant do your taxes, go through the filing and double check that everything adds up and there are no small errors that will make the auditors think you don’t know what you’re doing. This is just like checking your answers on a math test, except an auditor is far scarier than a teacher.

The important thing to remember is that plausible deniability isn’t present when it comes to taxes. Just because you had the right intent and didn’t mean to rip off the government, doesn’t mean they are going to give you a break.

There are varying levels of punishment, which will depend on how it looks to an outside observer, but you never want to get yourself in trouble just because some numbers didn’t add up and you failed to pay attention to the little details in your work.

2. Report All Your Income

Honesty is important, and even though you might be tempted to pull a fast one on the IRS and not declare some of your cash income, you shouldn’t. The IRS’s system isn’t perfect, but it is capable of catching you on some of these omissions.

Whether by inconsistent bank balances or the audit of a business partner, they can piece together the fact that you’ve been holding back, and then you will be the subject of a full audit.

Each business model is different and has its intricacies that can be misconstrued. The key is to think ahead and stress-test your system so that it takes into account these differences and presents them in a way that shows you have been following the rules the whole time.

This could mean detailed tracking of your cost of goods sold, or just realizing that a certain business process could easily be operated on a cash-basis and make it clear it isn’t.

By reporting all your income and pre-empting any further investigation, you make it possible to avoid a pesky audit.

Errors are expected to decrease when you submit your return by electronic means. Not only is this more convenient for the IRS, but it also makes your life easier as well.

The IRS likes it when returns are filed electronically because they become easier to analyze, compare with past filings, and are less ambiguous. It also shows a certain level of investment in the management of your finances and accounting systems that shows you are a conscientious operator of your company.

When you donate a good, you’re allowed to deduct a portion of its value. The IRS likes to see the item valued under 30% of the original purchase price, but many people ignore this and declare a higher deduction.

Avoid trouble here by thinking rationally. The auditor is going to see your deduction and know you didn’t do it properly, and that one error could cost you a lot of extra time.

This small clause is an example of a bigger problem: misunderstanding the law or purposely shirking it.

If you’re unclear on the application of part of the tax handbook, then investigate it thoroughly rather than making the decision that’s going to save you the most money. As was mentioned earlier, plausible deniability doesn’t exist in taxes. Know what the law is for sure, and then pay accordingly.

Anyone that is self-employed knows the joys of being able to deduct their home office, but most of these people also get a little overzealous in their deductions. The temptation is to count a larger proportion of one’s house than is reasonable or include unrelated things like gardening costs, but this should be avoided.

The IRS knows that this is an often-exploited deduction and they pay more attention to it as a result. Be conservative in your deductions and think about what you could safely argue to an auditor before you deduct it.

If you’re filing a Schedule C for self-employment, which ends up being a red flag for auditors, you should take action to incorporate. The government likes to investigate operations that aren’t incorporated because of the variable nature of their deductions and the self-reporting aspect.

Incorporating to an LLC avoids some of this trouble by adding a level of order that auditors like to see. It also means you’re following a stricter tax code, which makes it easier to spot inconsistencies and point them out.

So, if you incorporate now and follow the law, the government will view you as having a certain pedigree in your business and in the business processes you are following, which will work to your advantage in the long-term.

It’s required that you sign your return to signify that you have read over the return and can guarantee its truthfulness. Failure to do this is like saying you were either not confident in your return or so rushed that you didn’t sign it.

Either way, that’s a poor signal to send, and the IRS will want to look into your returns.

All seven of these things work to accomplish another: they make you look more trustworthy to the auditor, which allows them to conclude that you and your taxes are aboveboard.

There is always the temptation to try and reduce your taxes by nefarious means, but the way to think about it is the few dollars you save now are not going to be worth all the lost time in the future if­ you get audited several years in a row.

Be smart, think with the future in mind, and you’ll see how it isn’t worth it to cheat the government out of a few dollars. The time you spend talking to an auditor is both stressful and costly, so take any steps you can to avoid it at all costs. That includes talking with tax professionals to understand the process of an audit.

Common Payroll Mistakes and How to Fix Them
Why Your Business Needs an Online Presence
10 Tax Strategies for Business Owners
Starting a Business? Here’s What You Need to Know
4 Financial Mistakes That Can Ruin Your Business
What To Do If You Are Facing A Tax Audit
Electronic Payments of Taxes in 2017 Encouraged by IRS
Fake Charities Included on Top IRS 2017 Tax Scams “Dirty Dozen” List
6 Red Flags That Might Lead to a Business Audit