4 Things That Are Exposing Your Company To Potential Financial Fraud

According to a 2014 Insurance Journal report, 5% of all corporate revenue is lost to internal theft. Worldwide, this amounts to over $3 trillion in losses every year.

Financial fraud takes many forms, so it can be difficult to detect. Companies often expose themselves to potential fraud without even knowing it by doing the following: 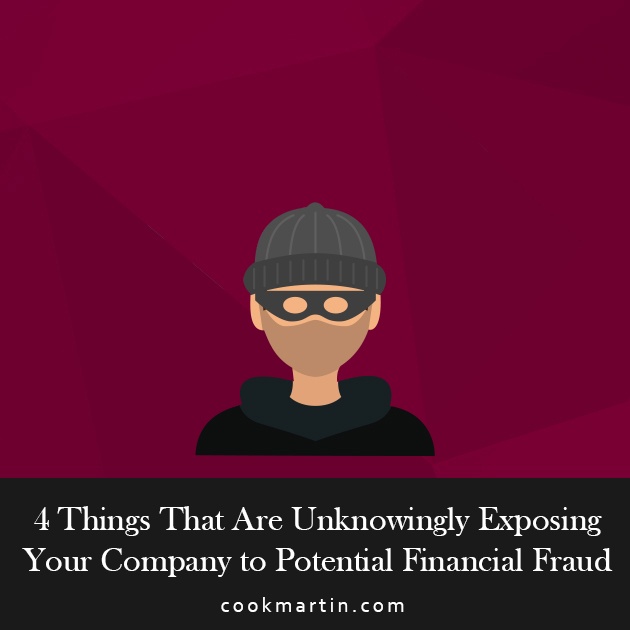 1. Relying Too Much on Third Party Audits

Third party audits are a good tool for business owners to use to ensure everything is running smoothly and risk is minimal. But sometimes, these audits make business-owners dangerously complacent. They think that someone gave them the “all clear,” so everyone can stop worrying about fraud so much, right?

Don’t do this. Third party audits never hurt, but they are also a fairly ineffective way to fight fraud. You’re more likely to discover fraud by accident than with a third party audit. Most fraud is detected by company sources. This isn’t too surprising, as no one has more incentive to investigate fraud thoroughly than the people whose livelihood depend on the health of the company. Preventing fraud is something you should chiefly handle in-house.

Fraud is unpredictable – no matter how much you think you know your employees, there’s always a chance that someone will commit fraud if they’re a situation where they’re desperate for money and/or faced with an easy opportunity for some quick cash.

Keep an eye out for red flags, such as employees living beyond their means (a middle manager showing up to work one day in a Maserati is certainly a red flag) and employees being oddly unwilling to share certain duties.

3. Focusing On Recovery Rather Than Prevention

It’s hard not to take it personally when you’re the victim of fraud. Someone you trust (or used to trust, anyway) just ripped you off. You may feel an urge to get back at them and prove that no one can mess with your money without facing consequences, but it’s just not worth it.

The stats show that in the majority of cases, money lost from fraud is never recovered. You’ll be better off using your precious time to improve fraud prevention rather than chase down old losses.

Corporate executives don’t exactly have a reputation for being the most tech-savvy people on the planet, and they often dismiss how much of a threat online hackers are to their business.

But according to the Ponemon Institute, every year 90% of businesses fall victim to at least one security breach. Security breaches can be very lucrative to hackers. These attacks cost US businesses over $400 billion annually.

Use complex passwords. Train your employees on how to avoid malware and use the internet responsibly. To not do so is to put your company at risk of true financial disaster.

Have any questions about financial fraud? Feel free to contact us and ask.