If you want to get someone riled up quickly, just ask them what their thoughts are on the Affordable Care Act (ACA). Whether they are for it or against it, they will likely have a lot to say - or they’ll be shocked if you don’t agree with them. 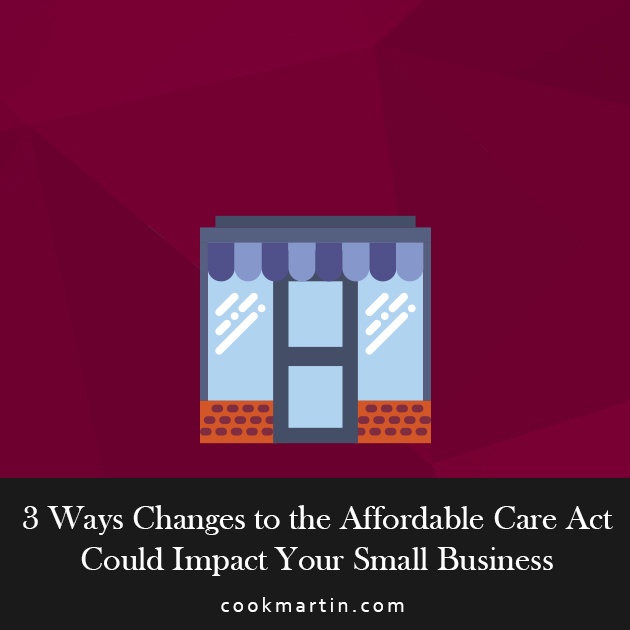 Also known as Obamacare, the Affordable Care Actstarted its roll out in 2010. The ACA has received a lot of pushback due to its effect on small businesses.

The political climate today is one such that Obamacare has come to represent something akin to communism for some people because of how it affects small businesses. The one thing people seem to forget is that President Obama says it was never meant for it to be the end-all of health care plans. He wanted a way to get insurance for a large portion of the uninsured, and then find a way to make it more sustainable afterward.

This could be considered misguided in some ways because of how the ACA affected businesses in the short-term, but the economy already had so much upwards momentum that he might have seen it as an acceptable risk to take.

Some owners of small businesses feel otherwise, and there are a few reasons for this that are outlined below. As a higher-level form of commentary, this is a classic case of the redistribution of benefits between two different classes. The uninsured lower class and the owners of small businesses are hardly the super-wealthy or super-poor, but most of the transfer in Obamacare occurs between them.

The ACA will affect businesses differently depending on how large the business is and what plans they currently have in place. Fifty employees is the limit before the ACA starts to have a significant impact on the business. Some of the effects of these changes could be put off by choosing a non-conforming plan before 2014, but eventually, all companies will be subject to the same legislation.

Below are the three most prominent ways that a small business can be affected by the ACA. None of them are particularly positive effects, but they have all been observed in the market and will continue until something changes.

The strange thing about this is that if you have fewer than 50 employees, you’re exempt from penalties, but this isn’t a problem. But when you hit that 50-employee marker, you suddenly have a massive expense on your hands.

This makes expansion a daunting prospect for those companies that are growing but don’t want their expenses to suddenly bubble out. There ends up being a $2,000 tax on for each uninsured employee over 30 employees once you hire that 50th employee, which can quickly add up.

There are a few reasons some owners of small businesses might dislike this.

First, they are paying more without necessarily receiving more. There is a new “tax” on their company, and not all companies can adjust to these sorts of changes that quickly. To keep the company functioning, the companies might have to take an immediate financial hit that comes right out of their pocket. This sort of a trade-off is a clear loss for the business owner.

The additional effect that is pernicious is how it incentivizes business owners to avoid growth. The company might be more likely to outsource work, overwork current employees, or keep their business lean to avoid breaking that 50-employee mark.

This hurts the general economy by creating fewer jobs, and it also hurts the employees as they don’t see an increase in wages.

Some companies were already providing their employees with health care before Obamacare, and that won’t change in the short-run, but when it does come time for renewal of health care plans, employees are required to go onto a more regulated plan. This could mean an instant increase in the costs of providing health care.

As plans start to expire, companies will likely have to look around for the most affordable options, but will also try to figure out which plans have the most austere measures for dependents and co-pays, since those can be major factors in the costs incurred. Regardless, this increase can come as a financial shock to small businesses.

In a perfect economic model, the value can’t just be reallocated from one group to another without significant costs occurring. Employers will continue to look for ways around the regulations or at least the cheapest possible options, and this will result in a net loss as more money goes to insurers, but employees and employers lose.

3. Premiums are Going Up

Studies show the increased costs of health care plans are partially a result of increased interest in certain plans. This is the result of demand meeting supply as well bottlenecks in the way the markets operate.

In the beginning, there were difficulties in the administration of these new plans, and they haven’t gone away yet. All of this has combined with general inflation to bring increases in the cost of health care on the exchanges for some people.

The result of all these regulations is that some employers are changing the structure of their pay so that health insurance is factored in. More expensive health insurance means lower wages. This might be fine for those people who absolutely need health insurance, but if you’re a young, healthy person, then this means you are essentially getting taxed for something you might not need.

To clarify, although the Affordable Care Act is not an explicit tax that is collected by the IRS, it functions as one in its application on businesses and employees. The issue is that this tax can end up having a flow-through effect where poorer people are being forced to pay for health insurance.

The End Result of ACA

The ACA is viewed by some as essentially another manifestation of a minimum wage that is being foisted on small businesses. There is a need for health care that is affordable for all, but by placing the burden on employers in what is essentially a veiled tax, the economy could be stifled, and employees might eventually be hurt as well.

There are several ways the ACA can hurt employees. They either never secure a job or they lose their job so the company can avoid having to provide an acceptable health care plan. The other option is employees are hired at a lower wage because their health care costs are factored into their pay.

Time will tell how the ACA will evolve, but in its current state, it can be a burden on some small businesses. Incentives are one of the most important things in business, and this seems to be one case where incentives weren’t considered.

There are ways to revamp the ACA, so everyone is happy. It’s important to remember that financial health and physical health are both important in this hypercompetitive world and that incentives should be in place that improves these for the general population.

But as long as premiums are going up, regulations are getting stronger, and companies are being penalized for having a higher head count, the economy might continue to experience slow growth. As with everything, balance is necessary.

If you have further questions about the ACA and how it impacts you or your business, contact the professionals at Cook Martin Poulson, P.C.

Common Payroll Mistakes and How to Fix Them
Why Your Business Needs an Online Presence
10 Tax Strategies for Business Owners
Starting a Business? Here’s What You Need to Know
4 Common ACA Issues
2015 ACA Reporting Requirements For Business